Sea Ghost kayak has been designed by Johan Wirsen, a valued sea kayak designer from Sweden. The kayak is a response to clients’ expectations aroused after the production of popular Ocean Spirit was discontinued. Compared to the original model, profiled spaces for a self-rescue system have been added.
The optimal balance between speed and stability has been gained with the use of ‘Swede form’ (the widest part of the kayak is behind the cockpit). The bottom produced in a ‘hard chine’ form provides excellent navigability. The kayak has a spacious cockpit, heightened in the bow and protecting you from high waves, which makes entering and exiting the kayak very comfortable. A low set deck maintains high lateral stability, even during strong wind and big waves.
Sea Ghost features standard equipment of adjustable footrests, three independent baggage hatches (including one day hatch), rigging and a skeg that can be replaced with an optional rudder.
"Sea Ghost is often chosen by less experienced users because of its unprecedented stability in this class and universality. I recommend Sea Ghost as your first sea kayak." -says Johan Wirsen

x
See in the store

A canoe for 3-4 people . Perfect for a family trip. The hull is made of polyethylene that is highly resistant to mechanical damage and abrasion. It will be perfect in shallow rivers and lakes.. A flat bottom with three inner... 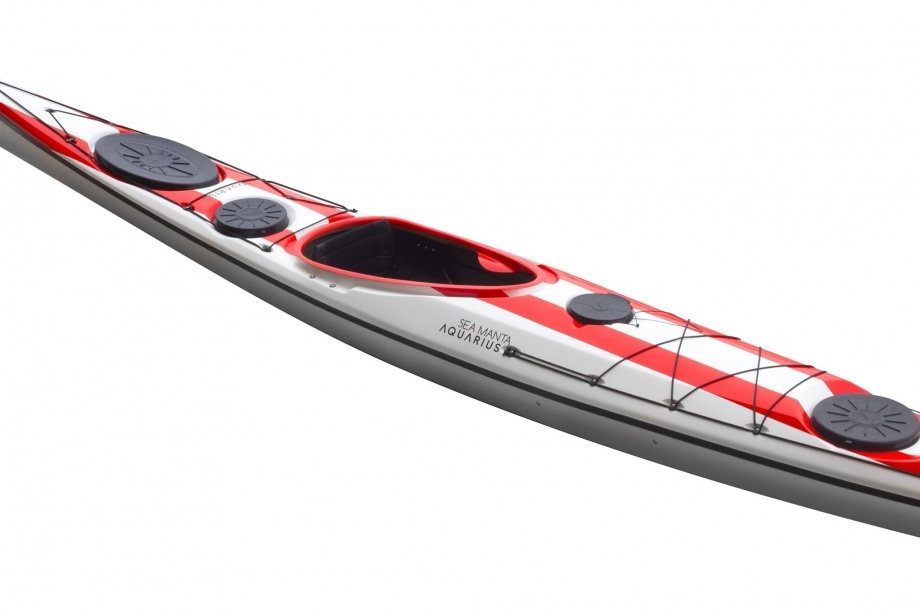 Sea Lion is a kayak of the British Style Sea Kayak type . Extraordinarily agile and fast. It is more than 5m long. Excellent nautical properties have been achieved owing to the use of an innovative, almost flat bottom of a very wide...

A kayak for people experienced in marine tourism . It operates perfectly on turbulent waves and during sudden turnings. The kayak’s dynamic characteristic has been gained by designing a shorter and narrower hull compared to...

A kayak for children weighing no more than 40 kg. Excellent for learning , gives joy to every child. Its ergonomic seat formed with a thermoforming method assures high comfort. This kayak is often used in Norwegian kayaking...

A universal single tourist kayak for rivers and lakes. It is characterised by a large loading capacity and high user comfort during longer kayaking trips. Aquarius Trek is an optimal choice both for beginners and advanced...

A tourist kayak with an optional baby seat that can accommodate two people . Highly damage resistant. Resistance and stiffness unprecedented in this class have been achieved by using HDPE quality polyethylene. Kayak’s bottom has been...

A big canoe that will accommodate up to six people. The classic appearance refers to the design of Red Indian boats. Its bench frame is made of wood, whereas seats have been made of interwoven webbing belts. Kanu Naomu is...

A universal single tourist kayak. Excellent for rivers and lakes. Very comfortable with standard equipment consisting of an anatomically profiled seat covered with elastic foam. The kayak is characterised...

A kayak for lighter men, women or for shorter trips with light baggage. Extraordinarily dynamic in steering, excellent for turbulent waves and during sudden turnings. Compared to classic sea kayaks, it features a shorter and...

A tourist kayak for two with an optional seat for a child . The kayak is designed for shorter trips, with no baggage hatches installed. A very comfortable profiled seat with a high backrest folded for transport...

Sea Leopard is a so-called British Style Sea Kayaks. It is intended for lighter men and women. Compared to traditional sea kayaks, it has a smaller displacement. This kayak, which is more than 5m long, is...

A race Polynesian boat of VA’A type . Designed to achieve record-breaking speeds in open reservoirs, especially in sea. It complies with the requirements of V1 category and may start in the Kayak Sprint Championship V1.. ...